“ Do you want to conserve a sweet memory of this love? Then lets love today and tomorrow lets say Goodbye!”

Love is global, but not universal by those means: everyone experiences love through ones own particularity and from ones own individuality. And a couple experiences it through two individualities. Because love isn´t, EVER, about de union of two halves, but about the cohesion of two wholes harmonizing through the pentagram.

There are as many worlds as people on Earth, and in a relationship everyone is a world itself, a life itself. Therefore we must admit each individual in a relationship has a particular perspective, a life project of his own, and, as such, agreements and similar paths will not always be present. It is about that certain probability: everything that has a beginning has an end; what goes up must come down; what lives must die.

That’s the essence of love, a sway, an electrocardiogram with ups and downs in a pulse that will possibly die. It’s a melody that reaches The End of the pentagram.

Accepting those ways of love is mandatory. When the end is reached, two hearts will reach separate paths. But two integral (unbroken) hearts. Why? ´Cause union arrives from two, not from two half-hearts (which implies the heart arrived broken to the relationship).

A heart remains broken as long as he does not understand this. When the “broken heart” expression is evoked, it refers to a heart unwilling to accept the other as an individual heart. Unwilling to see two hearts in the relationship, and pretended to be a whole as that relationship evolved. In that pretension lies the pain of knowing it is all over, for it was pretended love.

Let make ourselves a favor (a blessed one). Lets not believe of love as the joint of two halves, but the cohesion of two wholes…. that’s what love is. It’s not about BEING for each other, but about BEIGN THERE for each other. If we understand this, whenever we listen to our memories retrospectively, we´ll listen the most beautiful melody ever composed. ´Cause we´ll know it was no one’s fault; cause we´ll accept each one of us has a different life project; for we will have accepted that and its implications since the beginning. At the end we´ll find the pleasure of knowing that if it is over, it is because each of us follows the will of the heart; and that if we were together, hand to hand, it was due to the strongest will of both hearts: what both hearts desired the most

Speaking of two hears, and not about a two-halved broken heart, we´ll find that even The End must be shared, “cryed” together, shoulder to shoulder; enjoyed together, shoulder to shoulder. For enjoying The End is to reaffirm the joy brought to both hearts during relationship. And there’ll be neither pain nor rancor, but the mere satisfaction of today´s praeteritum; that path, that joint of to hearts. For it is known that everything flourished by means of two, not one. That’s the blessing that offers us love. 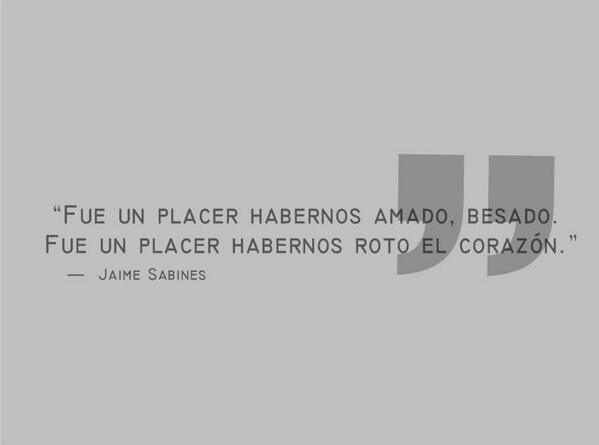